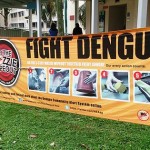 In the past months, Ebola has received a lot of attention. As of December 3, 2014, the Ebola Response Roadmap Situation Report published by the World Health Organization (WHO) counted 17,145 reported cases and 6,070 reported deaths. However, another viral disease deserves the same level of attention — dengue hemorrhagic fever, which is sickening up to 100 […]